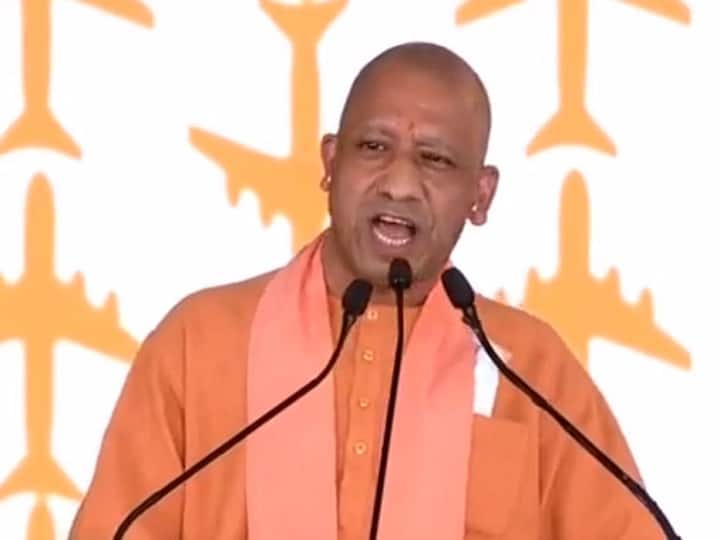 New Delhi: During the foundation laying ceremony of Jewar airport, Uttar Pradesh Chief Minister Yogi Adityanath applauded the projects launched by his government and asked for people’s contribution. Before inviting the Prime Minister for the groundbreaking ceremony, he said that some people caused riots in western UP earlier, but now it is the time for development.

“Some people caused a series of riots here. Today, the country has to decide whether it wants to give new wings to the sweetness of sugarcane here or let the followers of Jinnah run riot,” Yogi said.

#WATCH | Some people caused a series of riots here. Today, the country has to decide whether it wants to give new wings to the sweetness of sugarcane here or let the followers of Jinnah run riot: UP CM Yogi Adityanath on the occasion of foundation laying of Jewar airport pic.twitter.com/aoCMquUI9w

Yogi was addressing the people at Gautam Budhha Nagar where he said projects like the expansion of metro, Ganga Jal pariyojna, new bus terminal, medical park, indoor stadium, habitat center have been completed, besides many other projects.

He also said that some new projects are set to be launched in the western UP which will benefit the people of the region. Projects like film city, medical device park, heritage city park, handicraft park, logistic park, etc are to be launched soon in the region.

As the poll-bound state is heading closer to the assembly polls, the incumbent BJP is highlighting all the projects launched and completed by the government in the last five years.

ALSO READ | Noida Airport: UP Becomes First State To Get Fifth International Airport – All You Need To Know

The highlights of these projects include the Jewar airport, the Recently inaugurated Kushinagar airport, under-construction Ayodhya airport, Purvanchal Expressway, medical colleges, and many other projects.

According to Civil Aviation minister Jyotiraditya Scindia, “Jewar Airport (in Greater Noida) will boost the development of the nation. It will be Asia’s largest airport. It will also create employment opportunities for more than 1 lakh people.”