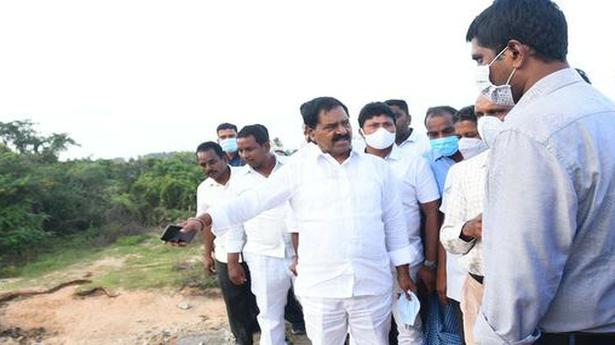 Deputy Chief Minister K. Narayanaswamy has said that the district administration has been put on high alert in view of the heavy rainfall forecast in the next four days, adding that water level in all major reservoirs is being monitored.

Mr. Narayanaswamy, who inspected the damaged causeways and roads owing to the flood in Kusasthali river in the eastern mandals bordering Tamil Nadu on Thursday, told the media that the irrigation officials had been instructed to keep a constant watch on the inflows and outflows of the reservoirs and initiate steps to release the floodwater downstream after alerting the people and field-level officials.

He visited the Krishnapuram reservoir between Karveti Nagaram and Pallipattau cross. He said that as there was no supply of irrigation water to the region this rabi season, the surplus water was released into the Kusasthali river. Collector M. Hari Narayanan said the revenue, police, and irrigation officials in all mandals vulnerable to flood had been put on high alert. He sought the field officials to initiate steps for evacuation of the people living in low-lying areas.

Keeping in view the incidents of people getting washed away while crossing the causeways early this month, the Collector said that police personnel were deployed at all causeways vulnerable to overflowing. He also instructed the officials to caution the public against staying back in dilapidated houses.

Meanwhile, the officials stepped up the distribution of rice and other provisions to the flood-hit hamlets in the eastern mandals.

The Nagari police rescued a man from the swirling waters of the Kusasthali river . According to information, the locals noticed the man in inebriated condition getting washed away and alerted the police. A rescue party pulled him out of the water with the help of ropes.