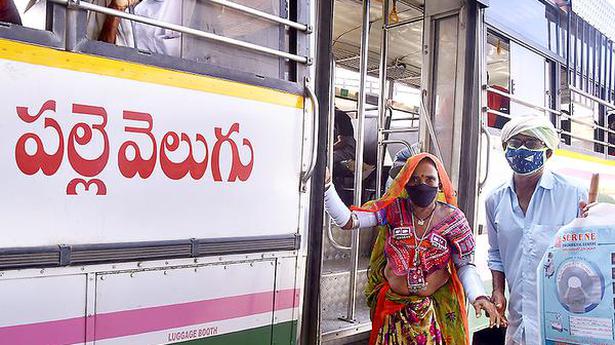 TSRTC officials have laid a renewed focus on attending to requests from students for restoration of “Palle Velugu” bus services to some villages which were discontinued for various reasons, including low occupancy ratio and COVID-19-induced lockdown in the past.

Considering persistent requests from students in both online and offline modes, authorities of the public transport entity restored bus services to three interior villages – Bodu in Tekulapalli mandal, Ulvanoor in Palvancha mandal and Kakarla in Julurupadu mandal in Bhadradri-Kothagudem district a week ago.

The bus services to Bodu and Kakarla were cancelled more than a decade ago owing to multiple factors such as thin occupancy rate, poor condition of roads and increased movement of private vehicles in the predominantly tribal-populated region, sources said.

There had been consistent demands from various organisations representing students, farmers and agricultural labourers to restore the bus services to Bodu, Kakarla and Ulvanoor to avoid financial burden on people dependent on private vehicles for their daily commute to nearby towns.

The long-felt demand of people of interior areas had been fulfilled with restoration of bus services to the three villages, TSRTC sources said.

Several students took to twitter, requesting the authorities to ply buses to their villages to enable them to attend schools/colleges in a hassle-free manner in view of full-fledged resumption of classroom instruction in the aftermath of the second wave of COVID-19 pandemic a couple of months ago.

Responding to a slew of requests by students through social media and representations made by elected representatives of local bodies, the officials restored bus services between Karimnagar and Gumlapur, Karimnagar-Pochampally, Karimnagar-Ryalapalli and Godavarikhani-Gopalraopet routes in the composite Karimnagar district over a week ago.

All trade unions of SCCL to go on three-day strike