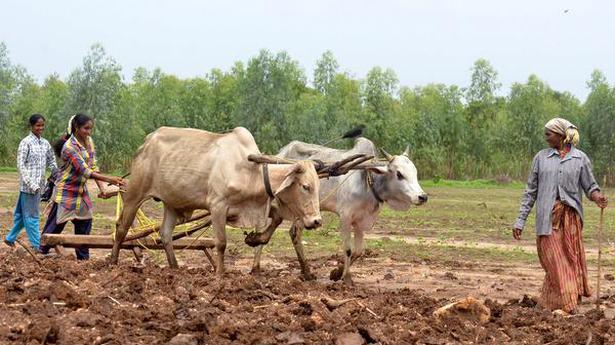 Around 5,940 applications were received from farmers of both tribal and non-tribal communities for settlement of long pending claims over podu (forest) land and sanction of pattas (title deeds) under the Scheduled Tribes and Other Traditional Forest Dwellers (Recognition of Forest Rights) Act 2006, for a little over 14,000 acres of podu land in the district.

These applications were submitted by farmers from as many as 75 habitations in the forest fringe areas of 63 Gram Panchayats in eight mandals of the district during the village level meetings held earlier this month, sources said.

Prior to receiving the applications, the district administration conducted meetings involving the elected representatives of the rural local bodies and other stakeholders on the provisions of the RoFR Act and the collective endeavour to protect forests.

The meetings were held under the aegis of the nodal officers as part of the State government’s recent initiative to resolve issues relating to podu land and prevent encroachment of forest land across the State.

Most of the applications were received from both tribal and non-tribal farmers mainly from Veernapalli, Garjanapalli, Adavipadira, Madimalla, and Rudrangi villages situated near the reserve forest areas in the district.

Though the district has relatively less forest cover compared to tribal majority districts like Mulugu and Bhadradri-Kothagudem, it received a substantial number of 3048 applications from non-tribal farmers for grant of title deeds for podu lands, sources added.

“We are awaiting guidelines from the State government to take up a field inspection to examine and settle the claims of the eligible persons in strict adherence to the provisions of the RoFR Act,” an official, who is associated with the task of receiving applications from podu farmers, told The Hindu.

The exercise is expected to pick up pace soon after the December 10 biennial election to the State Legislative Council from Karimnagar Local Authorities Constituency (LAC), the official, who did not wish to be identified, said, citing the model code of conduct for the ensuing MLC election, which is in force.

‘COVID cases could surge from mid-January, peak in February’