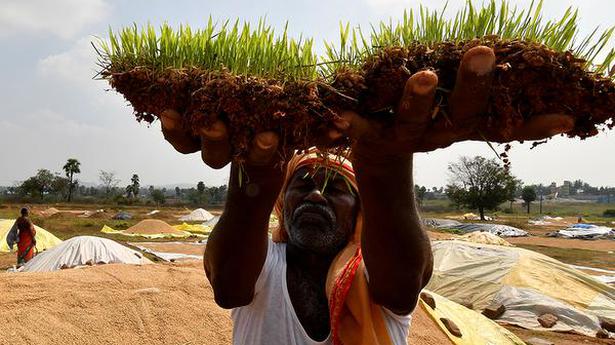 The Congress continued its attack on the Bharatiya Janata Party (BJP) government at the Centre and Telangana Rashtra Samithi (TRS) government of indulging in political gimmick to divert the attention from their basic failure of procuring paddy from Telangana farmers.

Mr. Uttam Reddy said it was laughable that Chief Minister K. Chandrashekhar Rao was threatening the Centre on the procurement of next season’s produce while forgetting his responsibility of procuring paddy of this season. He said CM should explore export options for rice rather than leaving the farmers distressed.

Mr. Vikramarka said farmers were losing ₹5 for every quintal of paddy due to the delay and paddy got wet and was discoloured due to heavy rains.

Farmers were forced to sleep on the roads after shifting paddy to the market yards.

Mr. Sreedhar Babu alleged that the government was not even prepared with arrangements like buying gunny bags and finalising transport tenders for shifting the paddy and this shows its insensitivity and insincerity towards farmers. Government doesn’t even have a figure of the gunny bags needed this season.”