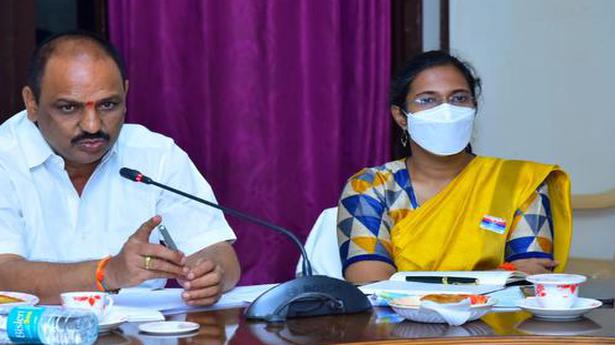 A high alert has been sounded in Kurnool and Anantapur districts against the possible spread of Omicron variant of the COVID-19 from Karnataka and Maharashtra, where a number of cases have been reported.

Roads and Buildings Minister M. Sankaranarayana held a review meeting in Anantapur with District Collector Nagalakshmi Selvarajan, Joint Collector A. Siri, and DMHO Y. Kameswara Prasad on Tuesday. The average positive cases have been in either single-digit or not exceeding 15 per day in Anantapur district, and literally ‘0’ cases in Kurnool district on most of the days in the month.

“These histricts have a long border with Karnataka and entry of the primary and secondary contacts of the Omicron positive persons is possible, hence people should be on high alert adhering to all COVID-19 protocols like wearing mask and avoiding large gatherings,” the Minister said. People in the villages must be vigilant and inform the officials about any new person arriving from these States, he added. Ms. Nagalakshmi asked officials to enforce protocols implement the wearing of mask in public places and impose penalties to ensure compliance. “We need to be highly vigilant against the possible spread of Omicron variant,” she said. Testing at least 5,000 samples a day must be ensured and vaccinating everyone with two doses must be high on priority, she added.

Ms. Siri said that COVID Care Centres were in place in almost all the major villages and they need to be inspected for proper functioning of water, power and other amenities and readied soon. Teams for manning the centres were formed and training was given. Now 104 call centres need to be started at mandal level.

Kurnool district registered entry of 267 people and a similar number in Anantapur district with recent foreign travel. “Efforts were on to locate and test them,” Kurnool Collector P. Koteswara Rao said at a review meeting in Kurnool on Tuesday and he assessed the availability of oxygen cylinders, ICU beds, and other facilities in different hospitals and PHCs in the district.

He asked the officers to prepare an action plan to tackle any likely third wave due to the Omicron variant.

STPI to set up incubation centre at Andhra University

Power tariff will be decided without affecting anyone: APERC Chairman