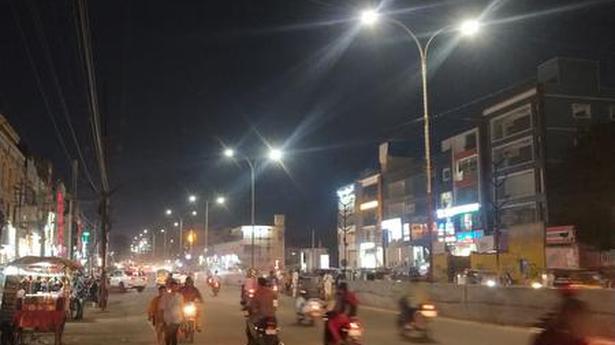 GHMC has stated that it is taking steps to cover all the ‘dark spots’ in the twin cities with streetlighting and these are being identified with the help of the police department and the public representatives concerned on Thursday. In this context, about 14,308 streetlights have been installed including 3,743 in LB Nagar; 1,358 in Khairatabad; 2,665 in Secunderabad; 3,827 in Charminar; 1,312 in Serilingampally and 1,403 in Kukatpally. This initiative comes in the light of the recent incident at KBR Park where an actress was assaulted and her cellphone was snatched away by a miscreant.

Meanwhile, Mayor G. Vijayalakshmi felicitated Additional Commissioner B. Santosh and Joint Commissioner Sandhya on Wednesday for the municipal corporation bagging the ‘Swach Sarvekshan 2021 award’ nationally. She pointed out that the city was adjudged as among the best in waste management from among 4,384 urban areas and even got a 3-star rating. She wanted the officers and staff to strive to get more laurels in the future.

TRS corporators celebrated as the GHMC staff took up immediate repairs of the ransacked chambers of the Mayor and Deputy Mayor by the protesting BJP corporators demanding the convening of the general body meeting. The glass doors, name plates and flower pots were replaced and a token cleaning was done by the ruling party members who criticised the ‘behaviour’ of the Opposition. However, BJP corporators claimed that the property inside the head-office got damaged when the police tried to arrest them and in the melee the glass got smashed and pots got broken.