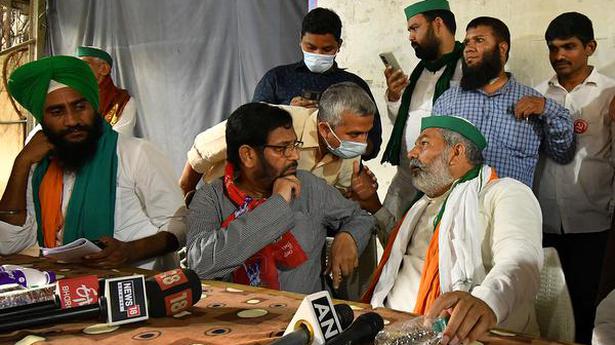 There are many bills against farmers’ interests, says Samyukta Kisan Morcha leader

Leader of Samyukt Kisan Morcha, a federation of farmers and other organisations that have been running an agitation against three farm laws for a year, Rakesh Tikait has stated that it is the responsibility of every government in the country to come to the rescue of families of farmers who lost their lives during the on-going protest movement.

Speaking at a protest organised in Hyderabad on Thursday on the occasion of completion of one year of the farmers’ movement, Mr. Tikait said the position of some of the 750-odd farmer families whose members participated in the movement was very bad and they needed a helping hand. They were the farmers of the country and should not be identified with any region or State as they had been fighting for a common cause.

Stating that there was no leader for the movement, Mr. Tikait said every farmer and farmworker in the country was its leader although 40 among them had taken the lead in making and managing arrangements for the long-drawn battle. “If succeeded, the entire farming community of the country will benefit and the honours will go to 750-odd families whose members (farmers) have laid down their lives in the agitation”, the SKM leader said. He said the fight of the SKM was not over yet and even the first phase of it would be concluded only when the three farm laws were withdrawn formally with the help of a legislation in Parliament. However, the next phase would be much longer as they wanted the Union Government to recognise the SKM as a group to hold discussions from time to time on all issues related to the farming community and the farm sector.

Mr. Tikait said their fight now was much beyond the three farm laws but was also against about 27-28 laws that were against the interests of the farming community, peasants and other workers. The laws/bills that were against the farmers and other such communities included electricity, seed and pesticide bills and several other existing pieces of legislation and there was need for a law on minimum support price (MSP).

Referring to Hyderabad and Telangana, apparently a political party, Mr. Tikait said: “There’s an unbridled bull here which says something and means something else. It’s helping BJP indirectly by spreading itself outside the State. It’s the team B of BJP”. He requested the people of Telangana to confine “that bull” to the State in the larger interests of the country.

Mr. Tikait likened the farmers who lost their lives during the movement to soldiers laying down their lives in the frontiers of the country. He demanded implementation of the Swaminathan Commission formula to make agriculture remunerative.