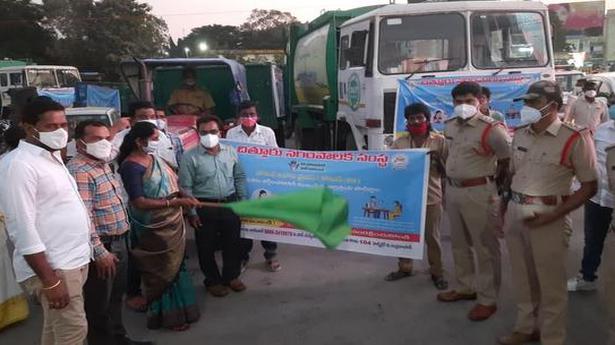 Chittoor district on Thursday recorded 932 COVID-19 positive cases, which comes as the highest daily tally in the last six months, after the sliding down of the pandemic’s second wave.

The Tirupati Municipal Corporation limits saw 366 cases, followed by Chittoor corporation with 124. The six municipalities of Srikalahasti, Puttur, Nagari, Palamaner, Punganur, and Madanapalle witnessed 121 infections, and the rest was spread over 60 mandals in the rural areas.

The highest tally in the New Year baffled the medical and health department officials as the graph took a phenomenal rise to 932 from just 13 cases on January 5. The reason is attributed to the free movement of the public on the inter-State routes, particularly on the pilgrimages and unchecked congregations at public places, and violation of the COVID-appropriate behaviour. Despite the instructions from the medical officials, the protocol of wearing facemask is largely ignored.

During the last week, the public movement in vegetable, fish, and meat markets has been on the rise. Revenue officials said the facemask rule remained completely ignored in cinema halls during the last two months, with crowd thronging the theatres. They deplored that despite cautioning the theatre owners, no steps were initiated to enforce the COVID guidelines.

An official said that at present the number of tests conducted in the district centres remained at 5,000 a day and the emerging COVID graph had only turned worrisome with a high positivity rate. “At present there is no clarity on the variant, and we are expecting the daily cases to cross 2,000-plus after Sankranti. Unless the creation of micro containment zones and partial lockdowns are enforced, the situation is likely to go out of control,” the official said.

Meanwhile, preparations for the Chittoor-district version of Jallikattu (bull race) are in full swing at several villages in Kuppam, Ramakuppam, and Gudupalle mandals, bordering with Tamil Nadu. On January 8, the village of Vepurimittapalle witnessed a frenzied bull race event.