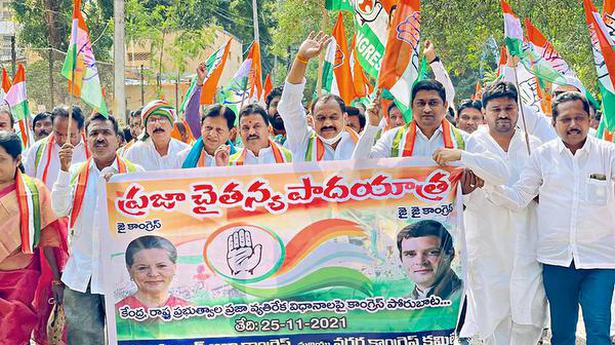 The Congress held protests across the State, as part of Jan Jagaran Yatra, demanding that the government procure paddy and other issues related to farmers, and submitted memorandums to district Collectors.

In Nizamabad, TPCC working president Mahesh Kumar Goud, former Minister Peddi Sudarshan Reddy, former MLA E. Anil Kumar and others led a rally and later submitted a memorandum to the Joint Collector. They demanded that the government register the suicides of farmers and pay compensation due to them apart from buying discoloured and sprouted paddy.

In Nagarkurnool, district TPCC vice president Mallu Ravi, DCC president Chikkudu Ravikrishna, Jagadeeshwar Rao and others visited the market yards to interact with farmers and later submitted a memorandum to the Collector.

‘COVID cases could surge from mid-January, peak in February’