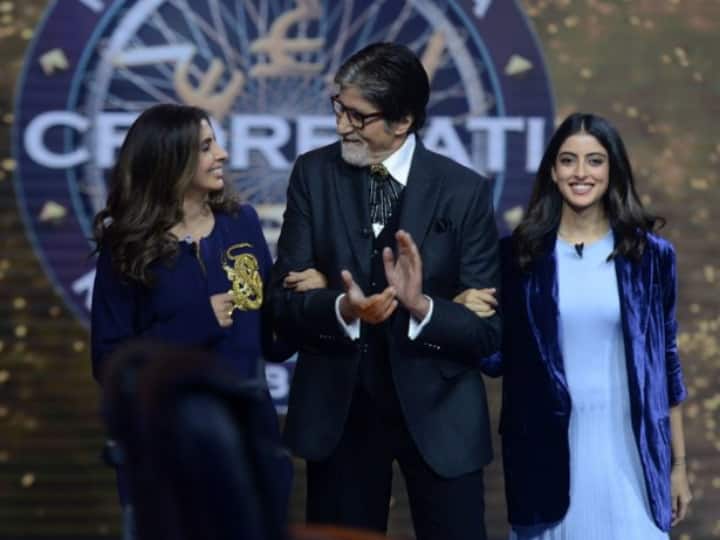 Bollywood megastar Amitabh Bachchan welcomed his daughter Shweta Bachchan Nanda and granddaughter Navya Naveli Nanda on the sets of his popular show ‘Kaun Banega Crorepati 13’. Sony TV, which airs the quiz-based show, had requested the ‘Deewar’ actor to ‘bring in his family’ on the hotseat to celebrate the 1000th episode of KBC. Senior Bachchan graciously accepted the request.

Big B took to social media to share a picture with Shweta and Navya from the sets of ‘Kaun Banega Crorepati’ along with a sweet caption. He wrote, “Daughters are the best.”

The ‘Chehre’ star can be seen looking at Shweta while welcoming her on the show. The photo also featured his granddaughter Navya Naveli, who was beaming with joy while arriving on the sets.

Navya and Shweta commented, “Love you.”

Very few reality shows have been able to cross the 1000-episode mark on Indian television. Amitabh, who runs a blog, talked about the milestone and also opened up about sharing screen-space with his daughter and granddaughter for the first time.

“So yes, the 1000th episode on the platform of Kaun Banega Crorepati was given its due importance and the request by the channel to bring in the family on that revered and feared hot seat was accepted. And there we were, as per the pictures in the previous,” Big B wrote.

He added, “A delight to be able to not just test the ability of the ‘contestants’ but to give the freedom to express what many have felt has been undisclosed and kept behind closed doors. The banter of the family dining table, the repartee, and most importantly the several causes that the young at this age think about and work for. An evening of great pride for the father and grandfather – for Papa and Nana!”

‘Kaun Banega Crorepati 13’ will bid adieu to the viewers in the third week of December 2021.